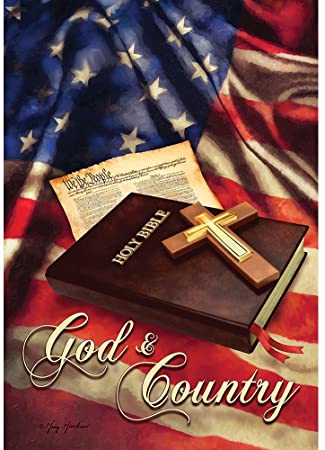 Our nation has been a topic for many of us over the past several weeks, and if we are being honest, though it is the forefront of our lives right now, this is something many of us have talked about behind closed doors for some time. For some times we have seen the division, we have seen the pure hatred from side to side and while it is disheartening to see this, we honestly shouldn’t be surprised. The truth is any kingdom on Earth, is going to fall short to the Kingdom of God which is why every week we pray the Lord’s prayer of being the Kingdom of God on Earth. Because when we lose sight of who is in control and whose agenda we are living to fulfill, then chaos, division, hate, are going to follow.

I understand today is July 4th, and we are celebrating our Nation, and we are absolutely going to celebrate America and the blessings we have to live in our great nation. But I also pray that our eyes will be opened to see the importance of seeking the Kingdom of God over the Kingdom of our Nation or any Kingdom of this world. I pray that we as Americans see that it is more important that we are the body of Christ and understand that it takes humility, honesty, and a heart turned toward God to maintain a healthy perspective of our earthly purposes.

Don’t get me wrong, there is a reason we have become a little prideful in our nation. America, for the bulk of recent history, has been a place that leads the world, a force to be reckoned with. The US remains at the top of the list when it comes to military and economic dominance.  Being number one is something Americans have grown accustomed to and take great pride in. But often that pride can be blinding to the church. This can cause the believer to stumble, seeking the kingdom of the American dream over the kingdom of God.

Again, none of this should be surprising to us because throughout history and scripture we see this which is why I find it important  to go into what is considered a promising period in scripture between God and his people and read a prayer that King David wrote. In this passage, David’s prayer reminds us of the posture and perspective the believer should have as they “seek first the kingdom of God and his righteousness” (Matthew 6:33)

The book of 1 Chronicles is a highlight reel of King David’s reign, serving as a reminder of the Davidic covenant to God’s people. The covenant, or promise from God, that a future messianic King would come from David’s line, would have been a great encouragement to people who were rebuilding their lives after being in captivity. It is important to note, what we are about to read would have been some of David’s last official words to his nation and his son Solomon. Ancient Near Easterners regarded such statements as extremely important, as indeed they were. In this address David reviewed the major lessons he had learned in life.

10 David praised the Lord in the presence of the whole assembly, saying,

“Praise be to you, Lord,
the God of our father Israel,
from everlasting to everlasting.
11 Yours, Lord, is the greatness and the power
and the glory and the majesty and the splendor,
for everything in heaven and earth is yours.
Yours, Lord, is the kingdom;
you are exalted as head over all.
12 Wealth and honor come from you;
you are the ruler of all things.
In your hands are strength and power
to exalt and give strength to all.
13 Now, our God, we give you thanks,
and praise your glorious name.

Let’s review a few notes from this scripture reading:

14 “But who am I, and who are my people, that we should be able to give as generously as this? Everything comes from you, and we have given you only what comes from your hand. 15 We are foreigners and strangers in your sight, as were all our ancestors. Our days on earth are like a shadow, without hope. 16 Lord our God, all this abundance that we have provided for building you a temple for your Holy Name comes from your hand, and all of it belongs to you.

Then David Closes out his prayer with a petition that we should pray for our country and brothers and sisters, that God keeps our hearts turned towards God.

17 I know, my God, that you test the heart and are pleased with integrity. All these things I have given willingly and with honest intent. And now I have seen with joy how willingly your people who are here have given to you.

18 Lord, the God of our fathers Abraham, Isaac and Israel, keep these desires and thoughts in the hearts of your people forever, and keep their hearts loyal to you. 19 And give my son Solomon the wholehearted devotion to keep your commands, statutes and decrees and to do everything to build the palatial structure for which I have provided.”

David, who lived in a time when God and nation were combined by a theocratical political system, still recognized that earthly kingdoms are not the true kingdom of God.

Andrew Whitworth wrote in Christian pop culture that “It is easy to revise American history to almost fairy-tale-like proportions that ignore the not-so-Christian events (such as theft from Native Americans, slavery, policies of racial exclusion) that formed the nation and have brought such prosperity to some. A simple look at the Beatitudes (Matthew 5:1–11), which lauds the poor, mourning, meek, merciful, pure, peacemaker, and persecuted as those who will see God and inherit the kingdom of heaven, stands in stark contrast to what the kingdom of America has sometimes valued. “While the story of scripture and the story of America are not always in conflict, they are not the same story. The end goal of America is not the Kingdom of God. The Christian story, the story of God’s redemption of the world through the person of Jesus and the work of the Spirit, forms us toward a different way of life than the story of America does. Celebrations in our Christian communities should lead to our citizenship in the Kingdom of God informing our Earthly citizenship, rather than the other way around”

To be clear on this day we celebrate our nation, American history includes commendable acts of bravery and sacrifice in the name of freedom. It is right and good to remember, honor, and respect the people and effort that has been made to ensure the freedoms that we experience in this country. We do well to show our thankfulness to God, as David did, for the opportunity to live in a free and prosperous nation. But we have to be careful not to give full and unqualified allegiance to anyone but Jesus Christ. We have to be mindful not to over spiritualize our nation’s role in what God is accomplishing in the world.