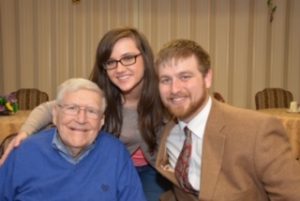 Today is February 27th, 2020. While this day may not seem very significant to many of you, this day will forever be ingrained in my heart. February 27th, 1930 was the day that Dr. Paul Ray Smith was born. For many in London, Kentucky, Paul holds high regards for his dedication to this community as a family doctor, to his leadership in the church and community. To me he was all of that and more, he was a friend. Saying Dr. Paul was a special person would be an understatement. The longer you knew him, the more you realized how remarkable of a man he was. He had an innate ability to encourage those around him and serve others without hesitation. Carl Greene wrote an article about Paul when he was awarded the States’ Citizen Physician of the Year and described Paul to a Tee.

He said, “The good doctor is one of the most caring and concerned physicians we know. His compassion, his love of his fellow man and his devotion to his creator all combine to make him not only a fine physician, but a fine man as well. “

Paul was a fine man, he was better than that if there is such a thing, he was a great man. I remember walking into the doors of First Christian Church at the ripe age of 24, wondering if God was playing a practical joke on me when he called me to be pastor. But what I didn’t know is that there were men and women at First Christian Church who would take me under their wing, praying continuously for me and encouraging me every step of the way. Paul in particular was such an encourager and support to me. He had all the accolades to be the most intimidating person in the world, but his big heart made him the most supportive and kind man in a time in my life when God knew that was exactly what I needed.

I’m not sure if Paul took me under his wing because of my preaching or because we connected as avid Kentucky fans. Whatever the reason is, I’m just thankful he did. He is literally one of the few people I have met that I actually believe was a bigger UK fan than me. I would visit him and talk about watching Tim Couch and Jared Lorenzon and he would talk to me about watching UK when Bear Bryant was the football coach and Ralph Beard and Wah Wah Jones were playing. He would talk about the glory years of Kentucky Sports in the late 1940’s and early 1950’s.

I told his children, I really believe half of our conversations were about Kentucky Sports. But I could listen to him tell stories all day about going to games that I had only read about. When our football team would lose, we would both shake our heads in disgust Sunday morning and talk about what went wrong. It bonded us, I believe God is amazing like that, he’ll use something as silly as it sounds like Kentucky Sports to connect people, to impact lives. Because of that connection I had with Paul, my life will be forever changed.

He taught me so many lessons through the way he lived and even when he was teaching me, he had a gentle way of doing so. For instance, in my first year as pastor, I had scheduled monthly nursing home visits but for whatever reason I put the time down wrong in my planner so one of my visits I arrived thirty minutes later than what was on the schedule. I felt terrible and the residents there were very gracious about this and Paul was one of the ones who told me it was okay and not to worry about it. But for the next year Paul would call me fifteen minutes before each visit to make sure I was on my way. He knew how important those visits were for me because he knew those men and women were going to pour their love and encouragement in me in a time in my life where that was very important.

Paul taught me a lot about love as well. He loved people, he loved London Kentucky, he loved his church family, but nothing held a candle to his love for his family and his love for his wife, Ann. As I talked to Janet, Ann Elizabeth and Paul Ray about their father they were adamant about how Paul always made a point to spend time with them, and teach them about what was most important. Even though his responsibilities and schedule were almost impossible to move around, he would somehow find time for his family. He would take Jan on Thursdays to do Woodwork projects and then Ann Elizabeth. Paul Ray would spend time with his dad in the dark room where Paul practiced his photography. They all shared different bonds from their Dad from wood working, to photography, to music, to the big red machine all the while Paul was a family physician and leader in the community.

One of the stories that stuck out to me, was when they shared about when their house burned down in 1977. Ann Elizabeth said she was around 15 at the time and was distraught about all her stuff that she had lost but would never forget that her dad got down on his knees and prayed and thanked God that he kept his Family Safe. Paul made sure his family and those who knew him best knew his priorities, His children knew of his unconditional love for them and his faith through actions like that.

Paul’s love for Ann was that of a Hollywood blockbuster. They fell in love in the Air Force and from that time forward they were a team. It was never just Paul, it was Paul and Ann, and they were two peas in a pod, never one without the other. And when she got sick, I have never witnessed such devotion in my life.

When I would do visits he would let me know from lunch until dinner he was with Ann.  He would sit with her, help her take communion when she was able, take care of her in the ways he could. My favorite story that his kids told me was a part of Paul I didn’t know but he would sing to Ann. Their love song was “You are my sunshine” and he would sing that song to Ann and her eyes would light up because that was their song.

Paul fought and beat the odds time and time again because of his devotion to Ann. The most amazing thing to me, is even through all the storms, he was always happy in the present. He was thankful that he got to spend time with his wife instead of focusing on Ann’s sickness. He was thankful he got to spend time with his kids and grand kids instead of focusing on his health. I believe more than anything Paul’s attitude was absolute evidence of his faith in Christ. His priorities were clear and regardless of his circumstances, God is Good. That was his life motto, through it all, his faith never wavered.

Paul’s love and devotion for his family, his servant’s heart to the community and his walk in faith is truly something to celebrate. I could honestly go on all day, telling you stories of how Paul truly was a gem.  Not a figure of speech, he was literally a treasure.

As this is Paul’s first birthday since his passing, I felt it was only fitting to remind myself and those who knew him why we continue to celebrate Paul and the hope of what tomorrow brings to all of us who place our faith in Jesus Christ.  The Apostle Paul described it so beautifully in his letter in Thessalonians 4:13-14.

13 Brothers and sisters, we do not want you to be uninformed about those who sleep in death, so that you do not grieve like the rest of mankind, who have no hope.

As we reflect on the wonderful man Doctor Paul Smith was, there is no denying what Brother Paul believed. His life was a living testament to the great truth of the Gospels as his life portrayed the love of Christ in every aspect. So as Paul instructs the church, don’t mourn like those who have no hope, but rather, be thankful for the hope we have in Christ.  Rejoice in the way the light of Jesus Christ was on full display through Doctor Paul, as he truly was a good and faithful servant.